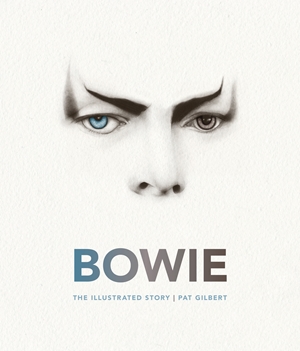 David Bowie released an incredible 27 studio albums, beginning with his eponymous 1967 debut and ending with Blackstar, released just two days before his death in January 2016. Widely regarded as one of the most influential musicians and performers of the previous five decades, Bowie demolished what were thought to be the limitations of stagecraft in rock music, as well as proving it possible for an artist to constantly–and successfully–redefine himself. As a result, Bowie has been credited with inspiring genres as disparate as glam and punk rock.

This sharply written and gorgeously designed retrospective follows Bowie’s career from the folkie baroque rock of his debut, to his breakthrough single “Space Oddity,” and on to his flamboyant glam rock alter ego, Ziggy Stardust. Author Pat Gilbert continues through Bowie’s soul phase, his electronic Berlin trilogy, his massive pop success in the 1980s, and his turn to electronica in the 1990s, as well as subsequent tours, notable performances, collaborations, and accolades. Nearly every page is illustrated with stunning concert and candid offstage photography, including gig posters, 7-inch picture sleeves, concert ticket stubs, and more. The result is a fitting tribute to one of the most influential and admired stars in rock history.

About the Author: Twenty-five years as a journalist, author, broadcaster, and one-time MOJO editor have taken Pat Gilbert on an oft-surreal journey, spiriting him from Paul McCartney’s secret hideaway in Long Island to Island label boss Chris Blackwell’s retreat at Golden Eye in Jamaica; from a spot on Sex Pistol Steve Jones’ L.A. radio show to an animal rights protest with Chrissie Hynde in Central Park and a visit to Pentonville Prison in the company of Billy Bragg. He’s been on tour with Oasis, and the Clash’s Joe Strummer once gave him a lift home. He’s shaken Smokey Robinson’s hand. In 2006, he produced the BBC World Service documentary: Armies for Hire (presented by Peter Snow), about modern-day mercenaries, and in 2012 was nominated for a Sony Award for his BBC Radio 2 documentary Before I Get Old: The Story of Pete Townshend.

Voyageur Press, an imprint of The Quarto Group